(This is part of our series of articles on pre/post Rev War occupations. Men had trades before the war and they returned to them after independence was won.)

The hair-dresser cut and dressed hair for both ladies and gentlemen, made wigs and hair pieces, created braids, and in some cases was also skilled in shaving. Eighteenth century hair dressers were almost exclusively male.

“Wigs and other ornamental decorations made of hair, are now become so common, that there are few ladies, notwithstanding they possess the most beautiful hair, who will not wear a manufactured article in preference to their own hair, under the impression that they can improve nature, and add to their charms”.

Tools of the trade included scissors, combs, rats or rolls, curling irons and pipes, powder and pomatum, razors, a strap and hone, etc.

Hair was cut and sold, sometimes after a woman died, for making wigs and hair pieces. “In 1720, the grey locks of an aged woman sold…after her decease…”. Animal hair from goats or horse tails, was the eighteenth century’s synthetic hair. A nag was defined as, “the name of a horse-hair perriwig”.

Wig makers usually bought hair from a Hair-Merchant who often had already picked, dressed, and curled it fit for weaving. “The Hair-Merchant buys hair of those who go up and down the Country of England to procure it, and imports some from abroad, he then sorts it into parcels, according to its colour and fineness; employs Pickers to pick the black from the white, and the dead from the live hair, and hands to mix it into proper shades of colour and curl it…They have a method of dying hair black, and bleaching other hair white.”

The cauls to which the hair was attached when being made into a wig were generally netted, “in the country by women and bought up by the Haberdasher, who furnished the Wig-Maker with them…”.

“Hair makes a very considerable article in commerce…There is no certain price for hair but it is sold from five shillings to five pounds per ounce, according to its colour.

Hair which does not curl naturally, is brought to it by boiling and by baking in the following manner: after having sorted the hair, it is rolled up, and afterwards fastened upon little cylindrical instruments, either of wood or earthenware, called pipes; in which state it is put into a vessel over the fire and boiled about two hours; it is then taken out and dried, and sent to be baked in an oven.

Hair thus prepared, is woven on strong thread which is sewed on a cawl, fitted to the head for a peruke”. (Peruke: archaic term for wig). 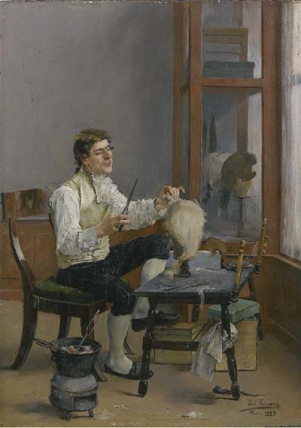 The preferred length of hair to be purchased was about twenty-five inches; “the more it falls short of this, the less value it bears”.

Gray and white hair was not as readily purchased as other shades. “The scarceness of grey and white hair has put the dealers in that commodity upon the methods of reducing other colours to these. This is done by spreading the hair to bleach on the grass like linen, after first washing it out in a bleaching water: this ley, with the force of the sun and air, brings the hair to so perfect a whiteness, that the most experienced person may be deceived therein, there being scarce any way of detecting the artifice, but by boiling and drying it which leaves the hair of the colour of a dead walnut-tree leaf. Hair, like wool, may be dyed of any colour”. 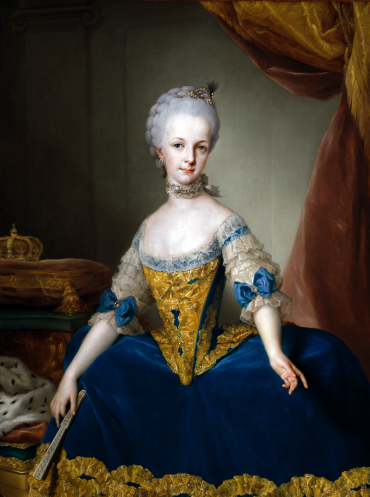 A Treatise on Hair, published in 1770, instructed how to wear false hair. “Though the lady’s hair may be so thin as to require an addition, yet, if her own hair be of sufficient length, there is very little trouble in fixing the other: only pin it at the top with two blanket-pins, and comb it down, and it will intermix and do up with the same ease as if it were all of natural growth.

Powdering the hair came into use in England by the 1770s (earlier in France) and fell out of favor late in the century. “In 1795, an annual tax of one guinea was laid upon all persons who should in future wear hair powder; this much injured the trade; the following year and also the year 1799, were seasons of uncommon scarcity with regard to wheat from which hair-powder is manufactured: these circumstances produced a revolution in the trade; the wearing of hair-powder was nearly abandoned…”.

White hair powder on dark hair tended to produce varying shades of gray, not stark white. White powder on light color hair heightened the blond color. Other colors of powder were available including pink. Powder was sometimes applied with a powder puff but could be sprayed on with a bellows while the client covered his or her face with a mask.

Journeymen hair-dressers earned between fifteen shillings and a guinea per week, but those who were also skilled in wig-making earned quite a bit more.

[In 1788] “When the hair is cut, put it up into papers, and turn it smooth at the points taking care not to let the irons be too hot…let the irons be held on it till it becomes smooth, and the curl is stiff, then let the hair be taken gently out of the dressing comb without pulling it, and every night at going to bed, let it be put up in papers, and then it will not require much pressing with hot irons, for too much pressing with the irons weakens and stops the growth of the hair”.

The ridiculously high ladies’ hairstyle of the late 18th century was achieved with artificial hair pieces strategically placed to add volume and height to a lady’s own hair. The hair-dresser also wrapped her hair around a “cushion” or “roll” made of various materials. The author of the “Toilet” (1778) went on to say hair should not be dressed over silk rolls, but it was far better to use wool. Other materials over which the hair was placed included tow, hemp, cut hair, or even wire. It was all held in place with pins.

Prior to a night at cards a woman wrote, “I was not above six hours under the hands of the hair-dresser, who stuffed my head with as much black wool as would have made a quilted petticoat; and, after all, it was the smallest head in the assembly, except my aunt’s”.

Once styled, several days usually passed before such exaggerated styles were combed out. The mixture of sweat and greasy pomatum, often nothing more than clean lard infused with flower petals, sealed with powder produced a disagreeable odor and even among the gentry lice and other pests took up residence in the hair.

“When Mr. Gilchrist [the hairdresser] opened my aunt’s head…its effluvias [bad odor] affected my sense of smelling disagreeably, which stench however, did not surprise me when I observed the great variety of materials employed in raising the dirty fabric. False locks to supply the great deficiency of native hair, pomatum with profusion, greasy wool to bolster up the adopted locks, and gray powder to conceal at once age and dirt, and all these caulked together by pins of an indecent length and corresponding color. When the comb was applied to the natural hair, I observed swarms of animalculas [small insects] running about in the utmost consternation and in different directions, upon which I …asked … [Mr. Gilchrist] whether that numerous swarm did not from time to time send out colonies to other parts of the body? He assured me that they could not; for that the quantity of powder and pomatum formed a glutinous matter which… caught and clogged [them]… and prevented their migration. Here I observed my aunt to be in a good deal of confusion, and she told me that she would not detain me any longer from better company; for…the operations of the toilette were not a very agreeable spectacle to bystanders, but that they were an unavoidable evil; for, after all, if one did not dress a little like other people, one should be pointed at as one went along.”

To rid the hair of odor and pests the wigs and hair pieces could be boiled and restyled. Vermin were removed from one’s natural hair with fine-toothed combs called lice combs. 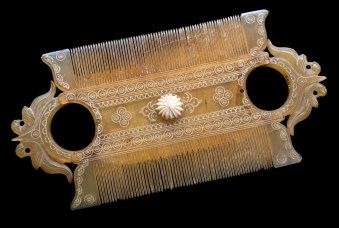 Pinning the hair tightly was not advised because it might lead to hair loss. The wearer was encouraged to observe a medium, dressing the hair neither too high or too low and to wear it in a style befitting age and facial features. “That which will suit the young lady of fifteen, would appear ridiculous when used by her mother at forty”.

https://www.colonialwilliamsburg.com/blog/2019-blog-posts/head-over-heels .    Copy and paste this link into your browser for a first-hand look at how original wigs were made in the 18th century.  The talented wig makers at Colonial Williamsburg recreated a 200 year old wig in the collection of the Massachusetts Historical Society and this web page describes the process with photos.