The following is the will left by George Washington in which he provides for his widow, Martha Washington, and an extensive list of relatives who either profited by the forgiveness of a debt or by receiving specified property.  He was obviously a wealthy man.

He provided for the freedom of his slaves upon Martha’s death.  He said while he wished to free them upon his own death, doing so would be difficult because of the marriages of some with those of Martha and he did not want to separate families.  Upon Martha’s death all were to be freed.  The elderly and the children were to be taught to read and write and taught a trade.  While doing so they were to be supported from his estate.  He left options for William Lee “for his faithful services during the Revolutionary War”.

He arranged for the dispensation of various historical relics which he possessed at the time of his death, including a box made from an oak tree “that sheltered the Great Sir William Wallace after the battle of Falkirk” and a gold-headed cane left to him by Dr. [Benjamin] Franklin.

Lastly he expressed his wishes for a notable university in this country and left funds for the building of it. 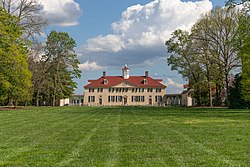